About us - Players Memories 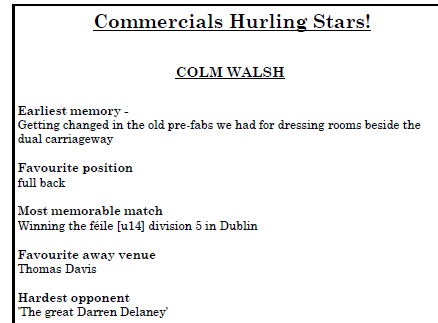 Making my senior debit against Craobh Chiarian at 16 years old, no helmets required then got my head split open and ended up in Naas Hospital just a regular Craobh Chiarain Match

Favourite Memory: beating lucan to win the Championship and the after party!

Toughest Opposition: Portuma in 7 a side! 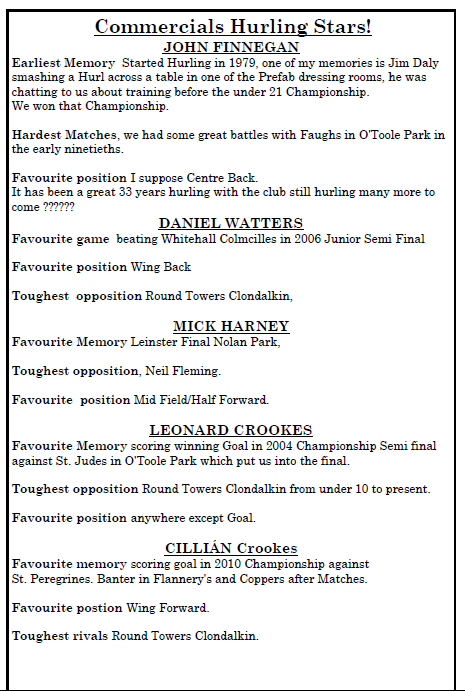 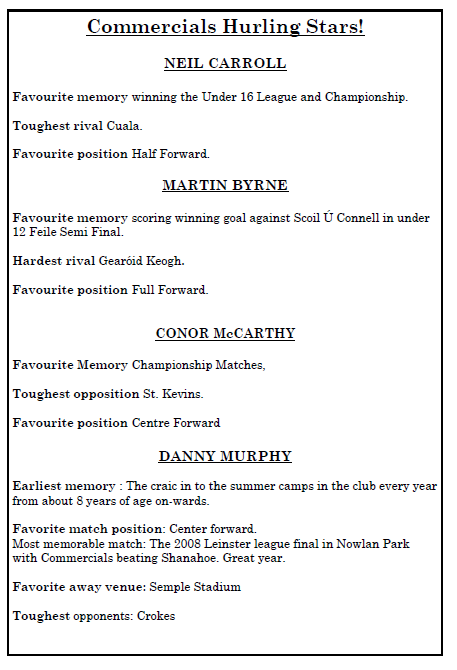 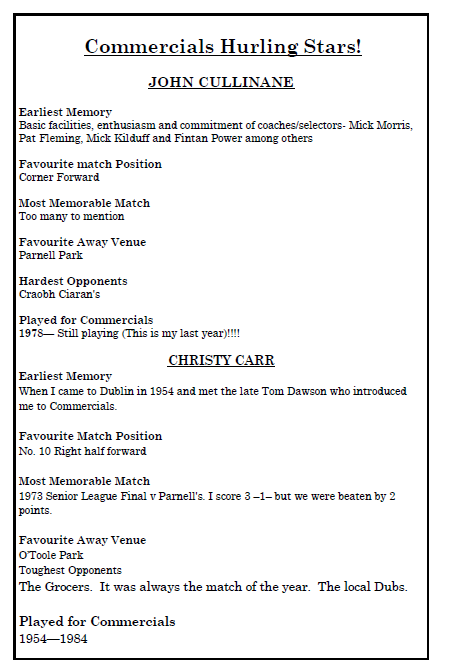 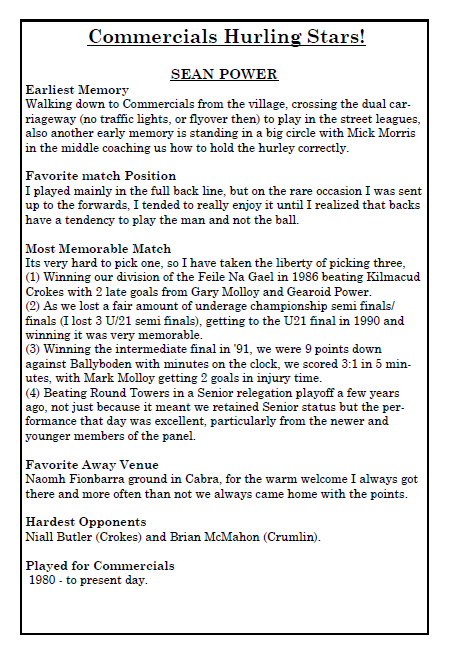 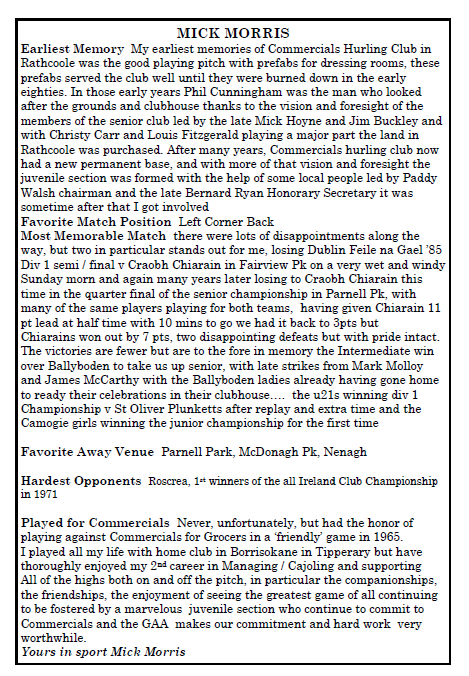 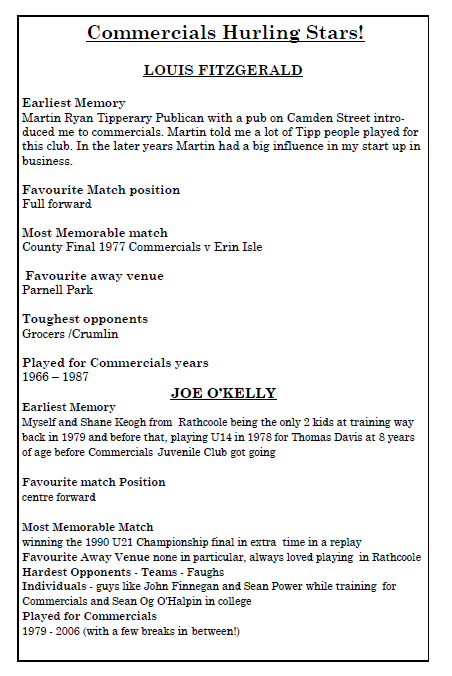 Commercials win a joy for Rathcoole

The grandmother used to holiday in Shanahoe, staying in the lovely home of Sadie Pratt.

One year, the uncle went down to collect her. He drove a Volkswagen, on a steaming hot August day back in '76.

The long trip was shortened by the hazy reception on the car radio broadcasting the Charity Shield Final between Liverpool and Southampton from Wembley where John Toshack's goal won the day.

Now, reeling on the years to last Saturday, Shanahoe were in a Leinster Final -- the SHL Division 3 Final against Dublin's Commercials.

A big day for both clubs. Nowlan Park in the sunshine. The Commercials Army had taken up residence in the Grace stand.

A club rich in tradition. The fabric of village life in Rathcoole, Dublin's last hurling outpost.

On Saturday lunchtime, their green and red flag flew proudly at their club grounds. Come tea-time, it was reaching for the stars. Fingers had got his hands on the Cup, and the Lucozades were on Louis.

Shanahoe had proved a hardy crew, and a team with resolve. They endured a blistering start from the Dubliners, finding themselves 1-7 to 0-2 behind after just 11 minutes.

Commercials were playing delightful hurling. Gearóid Keogh was having the game of his life at centre half-forward, pointing from play and from the tee.

Shane Cooke was the ideal target man at full-forward, and all over the pitch there was a zest and purpose in the Commercials display.

In the land of the black and amber, Commercials looked very assured indeed.

Shanahoe were struggling. Right corner-forward, Anthony Kirwan, looked to be their danger-man. A player of pace and skill.

Two goals before the break brought the Laois men back into it. Liam Cuddy began to purr at midfield. And, for a spell, the match was in the balance.

John Cullinane drilled in the first Commercials' goal in the 11th minute at the O'Loughlin end.

Jimmy Kirwan's 13th minute penalty got Shanahoe back on their feet, and in the 22nd minute, Timmy Carroll found the roof for their second. It was 1-12 to 2-4 to Commercials at the interval. The tempo of the second half faded after an early injury to a Shanahoe defender. Unfortunately, they also had a player stretchered off in the first half.

During the lengthy second half stoppage, Commercials got the sliotars out of the bag and kept on their toes.

Keogh and Shane Cooke popped over points, and when Daniel Murphy's pass allowed John Morris to kick to the net, the day, and the silver, was won -- 2-20 to 2-6 to Commercials.

When it mattered most, the Commercials defence, and goalkeeper, Kieran Gregg, stood stall.

The Commercials players came over to take the applause of their followers. Out on the pitch, manager, Danny Murphy, accepted the handshakes of all.

A memorable day for the famous old club. And for the souls that kept the candles burning.

And over in Spain, nobody was happier to hear the result than Seán Power. Back in The Poitin Still it was standing room only.

Much to celebrate, and to look forward to, for a club that will always be a forever friend of Dublin hurling.

This site uses cookies: Find out more.
Scroll to top